Could China lead the way for organic winegrowing?

Could China lead the way for organic winegrowing?

For the past 100 years, synthetic fertilisers and pesticides have dominated the farming world. But as environmental awareness increases, an accusatory finger is being pointed at the use of chemicals for agriculture. Bernard Burtschy explained why China could well be in the forefront of the drive to replace them with organic techniques.

As a response to the deleterious effects of intensive farming, sustainable methods began to emerge as an alternative in the 1990s. This was several decades after the concept had first been promoted by Englishman Sir Albert Howard in the 1940s, and the term was coined by an Australian in 1939. Similarly, the concept of biodynamic farming first arose in the 1920s when it was attributed to Rudolf Steiner, but according to Bernard Burtschy even dates back to a book by fellow German Goethe in 1790. It would take several more years for sustainable to evolve into fully-fledged organic, and for organic to move from niche to mainstream. The category’s growth is now irrefutable: in 2017 alone, organic farming worldwide surged by 20% over the previous year, fuelled by spiralling consumer demand. Figures shown by Burtschy revealed that the USA is the world’s largest market for organic products, but China already ranks fourth. A survey of Chinese consumers showed that 57% of them feel organic is important, compared with just 35% in, say, France. Ironically, China is also the leading consumer of pesticides, but Burtschy believes that the seeds have already been sown for the country to emerge globally as a spearhead for organic and biodynamic farming.

Fig : Percentage of consumers who rated “organic” is important 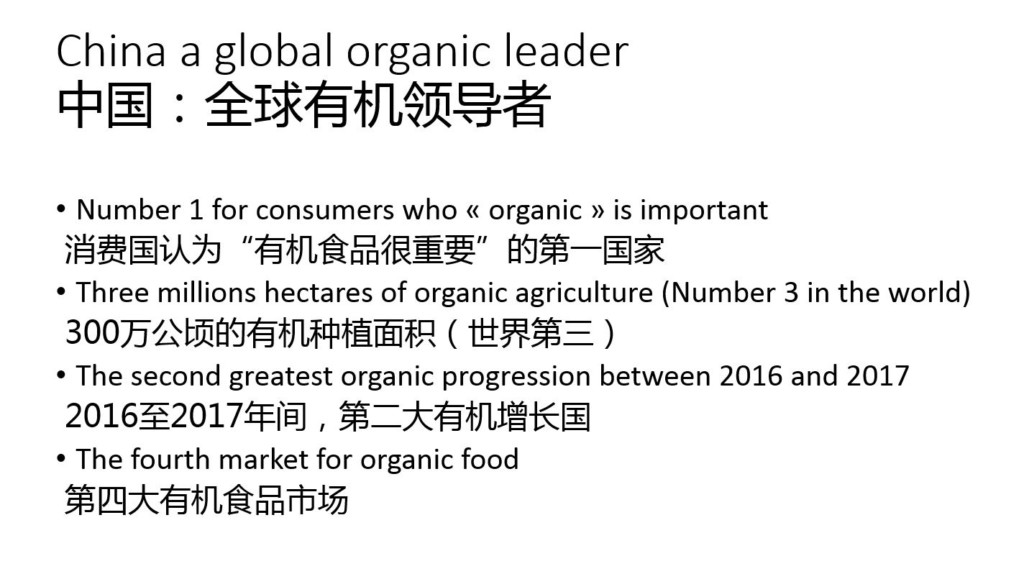 “Organic is inevitable for China”

“Biodynamic is very close to Chinese medicine”, he argued, “adding vitality to the plant, soil and livestock for instance. Biodynamics match traditional Chinese philosophy very well, through their focus on fire, earth, metal, water and wood. Similarly, the Chinese calendar is lunisolar, like the biodynamic calendar”. But more than these similarities, China is ripe for converting its farmland and vineyards to organic. Stressing the need for the country to switch its focus from industrial to agricultural pollution, Burtschy said it was “urgent to monitor and control agricultural pollution, which is much more important than industrial”. He drew a parallel between Australia’s switch to organic prompted by its pollution issues in the 1940s, and the catalysts for change in China. Pollution is a huge cause for concern in China and judging from the figures, is encouraging consumers to change their drinking and eating habits. Within the wine industry, the emphasis on organic is tangible. Wineries are increasingly following Château Bolongbao’s lead. The 70-hectare estate in Beijing’s Fangshan district is already certified organic in China, the USA and Europe. 5% of Chinese vineyards are now farmed organically but many more are in the conversion phase. “Research into organic in China is very active and with many vineyards breaking ground now, it is easy to go directly into organic viticulture. Over the next ten years, every winery will have to go organic. It is inevitable for China”, prophesised Bernard Burtschy, for whom that necessity is also a huge opportunity.